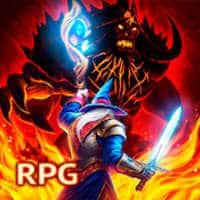 This epic Epic Dark Fantasy RPG game is a product of the publisher BIT.GAME. RPG games are generally known for their appealing gameplay along with the high-quality graphics, and Guild of Heroes isn’t left out. Although it’s not very original, it’s still a fun game with excellent visuals in what we call charming Dungeons and Dragons style. If you are a lover of RPG; this is an opportunity to show everyone that you’re the hero they’ve been waiting for!

We’re sure you’ll love the dark fantasy world where wise wizards and gallant knights wage war against the forces of darkness. The game is themed like wars in the wizarding world. Prepare to be immersed in a world full of monsters, witches, flying brooms, magic wand, and warriors. You are a warrior in a world under attack by monsters. They are trying to dominate the human world; can you and other warriors destroy the monsters and protect the world?

Guild of Heroes is an action role-playing game. You get to assume an absolutely new role! You have access to dozens of sets of powerful gear, hundreds of unique abilities, fierce monsters, and large-scale PvP battles! There are four main characters in the game, including Witch, Archer, Warrior, and Assassin. Each character has its strengths, skills, and items system. Interestingly, you get to switch characters without restarting the game. For instance, if you are Witch, and you want to change to Archer, you do not need to change the character but just change the items for the character. That so good!

Just like most other RPG titles, Guild of Heroes has two main modes, PvE and PvP. The game’s mission involves travelling the world, fighting in mysterious caves, vast desert, and the forest. One notable thing about the game’s mission system is that you can pause the game and continue playing another day while you’re completing a mission. You do not need to play for hours to complete the mission. Also, the missions in Guild of Heroes are relatively short, lasting around two or three minutes. Between missions, you can buy new equipment or sell pieces you no longer want.

Things just got more interesting. The PvP mode allows competition with other players. Now you get to play with great masters with skill and tactics, just like you.

The game is not difficult to learn. Whether you’re a longtime gamer or a beginner, you can master the gameplay after a few times playing. You might need to learn incorporating your choice character’s skills in a way to create powerful combo that will cause tons of damage. Guild of Heroes will allow you to learn more powerful skills along the way as move to higher levels.

We feel the 3D graphics of Guild of Heroes is worth comparing to modern games. The character effect is impressive. If you’ve played slot games at online casinos like NetBet, MrGreen, Sir Jackpot, among others, you’ll know everything looks very real in there. Guild of Heroes is filled with high definition textures; the animations and special effects tie together to breathe life into the textures.

Are you ready? Take the first step in your epic personal tale by downloading Guild of Heroes Mod Apk in the link given below. Go face-to-face with other players in electrifying PVP combat, take down mages in the endless arena, and engage in massive Guild Wars against players from all over the globe.