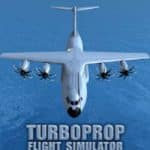 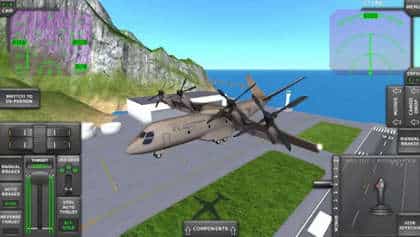 Tilt-Wing VTOL aircraft (both in airplane mode, and in vertical, helicopter-like mode).

Learn to fly with training missions (teaching the basics of flying, taxiing, takeoff and landing).

Explore the plane’s interior in first-person (in most levels and freeflight).

Load, unload, and airdrop supplies and vehicles with the cargo planes.

Takeoff and land on improvised runways (and airports, of course).

Explore without restrictions in free-flight mode, or create flight routes on the map.

NO MANDATORY ADS! Only optional, rewarded ones in-between flights.

Great 3D graphics (with detailed cockpits for all the aeroplanes).

Multiple cameras (including cockpit cameras with captain and copilot positions).

Several islands with many airports.

Love this game. Really good graphics and fun levels. Some of the newer plans have electric motors in the front wheels. Which help with saving money on fuel and the airport money. You don’t have to worry about recharging a battery because it all comes from the same power source. Unfortunately you would have incorporate a front wheel steering control. But I think it would be cool to see that in your next update. There is a video about it on YouTube. Thanks!!

This simulator is awesome and I doubt that it will be free for long so get it while you can. In app ads are also optional so you can focus on game play rather than the ads. I only run ads when I need a break which is fairly often because it’s intense and also so the creator gets his due which he rightly deserves. The realism is on point! Great work!

AI-piloted traffic can now be unlocked in Free-Flight.

Auto-Pilot now has the ability to taxi and take-off on its own, and also to select the airport and runway on which to land.

Auto-Pilot and Auto-Land are now free and included by default in the Free-Flight. If you unlocked them already, you will be refunded their cost when you start the updated game for the first time.